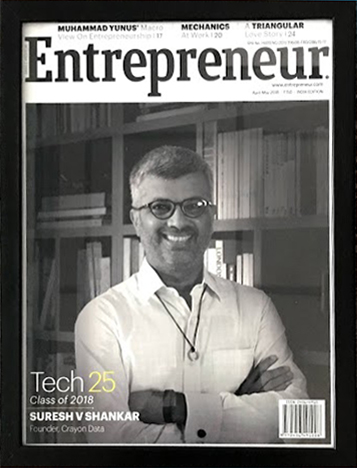 SURESH V SHANKAR (55), FOUNDER, CRAYON DATA – by Entrepreneur Magazine.
Among the league of companies which have kept their high growth under the radar for quite some time is Singapore and Chennai-based big data company Crayon Data. Launched by former director at IBM – Shankar has been a big data and digital evangelist for over a decade. Further, he has been the point person in creating disruptions in the way businesses in banking and hospitality sectors use data for intelligent business decisions. For instance, Crayon Data’s global ‘Taste Graph’ data identifies customer tastes and preferences for its clients to have deeply personalized customer interactions. “This happens at an anonymized level that protects privacy for customers and ensures security for our clients,” says Shankar. A bank, for example, uses its product Maya to identify the most relevant merchants and offers to send to their customers instead of spamming them with one-sizefits-all messages.
In a span of five-and-a-half years, Shankar has built a staggering customer base of over 500 million globally. That’s among the reasons for Tata Group Chairman Ratan Tata and Infosys co-founder Kris Gopalakrishnan to back him. Being picked up as one of the top 10 software start-ups in the world in 2014 was another major highlight for him. The platform and proposition offered by Crayon Data is, however, scalable across industry verticals. The company’s Yoda platform helps enterprises to personalize sales messaging for small and medium enterprises’ prospects. “Our proprietary Taste Graph, our patents in the areas of understanding tastes, and putting them to use for enterprises are two big entry barriers for others,” he adds.
DRIVING ENGAGEMENT
LAUNCH June 2012
MONTHLY IMPRESSIONS 1.1m
GROWTH 230% (2018 projected over 2017)
HEADCOUNT 70
NO. OF PATENTS 4

Suresh Karthik is a certified digital marketer and executive alumni of IIM–Calcutta who’s really enthusiastic about all aspects of inbound demand generation.

Kenny Lee has joined Crayon Data as Vice President of Finance.   Kenny comes with 13+ years of experience in driving financial and operational excellence...