Lighthouse Fireside Chat with Aliza Knox: nurture a relationship with your career 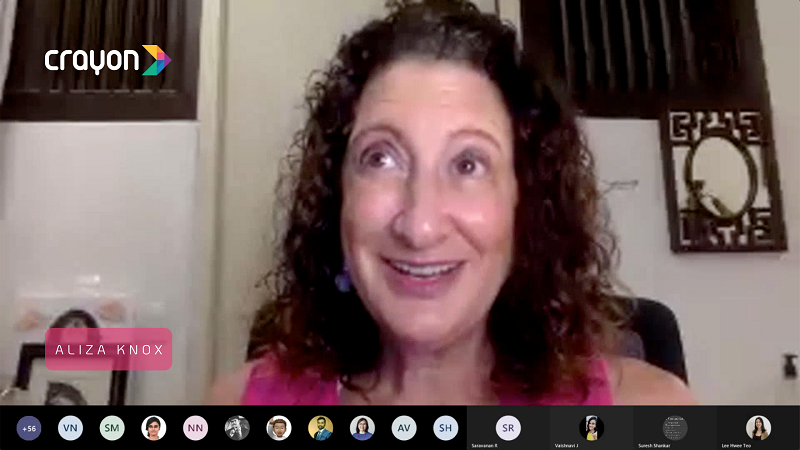 Aliza Knox spent four years getting an MBA from New York University simply because she wanted to use the newly built pool on their campus (which was only open to students). “I lived in Greenwich Village, and the existing pools were between the size of teacup and a large mug – they were not for swimming laps,” she quipped, speaking at the third and final edition of Crayon Data’s IWD Lighthouse series on March 18th.

The session was filled with engaging anecdotes from her career spanning over four decades; with Visa, Google, Twitter and ANZ among others, as well as adventures from her travels. Recently named Woman of the Year IT 2020 (Asia), Aliza shared six tips to help approach work and personal life with an emphasis on happiness. “People always talk about their work and life like they are on opposing teams, and they’re trying to get them to offset each other. It doesn’t have to be that way,” she says.

Key takeaways from the interactive chat 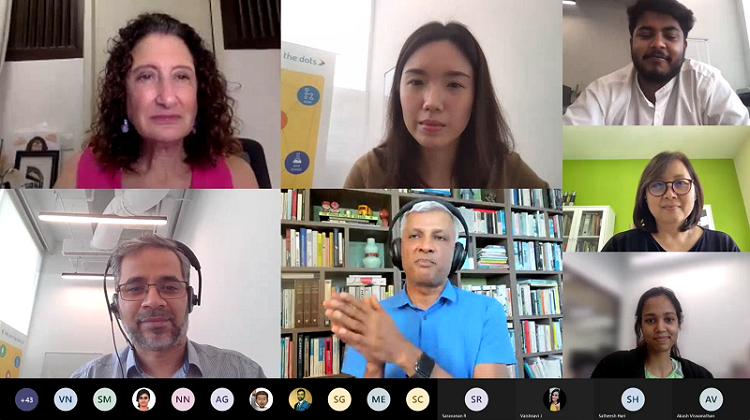 While Aliza initially wanted to go to Stanford, the unplanned detour to New York University meant everything changed. It might not sound like a great idea to get an MBA simply because you want to swim or decide which company to work for because you want to live in a particular part of the world. But making these goofy decisions can result in happier experiences. And sometimes, that is the most important thing.

#2 Stamina is a muscle

We often hear, “It’s not a sprint, it’s a marathon.” What we really should be focusing on is stamina to see things through. It is a combination of perseverance and enthusiasm, and a muscle you need to build. To do that, you need to take care of yourself: sleep well, keep calm, use support groups if you need them.  It’s important to keep yourself in the mindset that not every day is going to be great. Most of the time, you should be getting up feeling pretty good about what you’re going to be doing today.

Especially for young people, it’s easy to get into a doom loop where you feel trapped and think you can’t leave a job because of so many reasons. Go out and speak to people who do jobs that you think you might want to do. It could help you feel one of three ways:

(a) That you are in fact, not stuck

(b) That you could potentially do other things and

(c) That you’re here (in your company) because you want to be.

In the case of colleagues who are spread across the world, much like in Crayon Data, a little bit of courtesy goes a long way. Be considerate about scheduled calls across time zones. Pick up some simple gifts for them when you travel – Aliza likes sushi erasers from Japan, elephant candles from Cambodia and ridiculous keychains from anywhere! It’s critical to build this social capital. Being in office makes this easier, of course, since young people can interact with seniors more easily, which is harder to do via email or video call.

A lot has been said about the importance of mentors in your professional life. But you also need a sponsor, someone who will stick their neck out for you. In many cases, especially with internal promotions, that person must be in your corner and be able to convince people to believe in you the same way that they do.

#6 Nurture your inner relationship with your career

It’s almost like a relationship with a person. Aliza gave the example of a friend who was hesitant to ask for a promotion. “She felt like asking her manager for the promotion meant that he would give it to her only because he did not want her to quit. She wanted her work to be noticed and rewarded,” she said. While companies can have good intentions, it won’t just happen. You must nurture your own career. Your relationship has to be with yourself and what you want out of your career.

What time is it?

Should you stay or go? Move away or move up?

You know you are not going to stay in the same job for the rest of your life, so think about what direction you want to go. Do you want something different; do you want to move to a new location; do you want to move into a new field? Most companies are anxious to keep good people, and while they may want to hire you as a round peg that fits in a round hole, it doesn’t have to be that way. You can always carve a niche for yourself and prove your worth in other areas.

Aliza agreed that taking the leap of faith can be daunting, but it is a personal decision to take. “We recover from heartbreak. Similarly, we can recover from job setbacks that are a result of bad decisions.”

Read Part I and Part II of the Crayon Lighthouse: IWD 2021 special series.

In 2022, the International Women’s Day theme asked us to “Imagine a gender equal world. A world free of bias, stereotypes, and discrimination.”   For...

Why these women in tech love Crayon Data!

Why is Crayon a great place to work? We won’t tell you. But these Crayons will. Scroll down to find out why they chose...